This research began in early 2012 when Dr Shaphan Cox and I started running regularly from Curtin University to Matagarup (Heirisson Island) to learn about the Nyoongar Tent Embassy. At the time, the embassy was being criminalized by Perth's popular news media and subject to police raids despite being a peaceful important gathering of Aboriginal people at a state-registered Aboriginal Heritage Site. The embassy invited us to investigate how the gatherings were being represented in the media, starting a research project that has included the following publications:
Our major findings were presented to embassy spokesperson Maureen Culbong at Curtin University's Centre for Aboriginal Studies on 30 August 2013.

Setting Up the Nyoongar Tent Embassy  — A Report on Perth Media 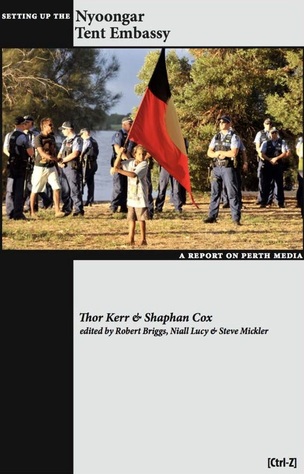 In early 2012, people concerned with native-title negotiations gathered at Matagarup on Heirisson Island to discuss Aboriginal sovereignty and native-title negotiations. Setting Up the Nyoongar Tent Embassy explores media coverage of the Nyoongar Tent Embassy’s establishment and the sometimes violent actions taken by state authorities to eradicate it.

The book reveals the ways in which Perth news media reports on these events routinely criminalised the actions of Tent Embassy participants at the expense of reporting on key issues of Aboriginal sovereignty and the members’ peaceful affirmation of native title. In its exposure of how reporting practices both legitimised and encouraged a violent state response to the Nyoongar ‘protest camp’, Setting Up the Tent Embassy offers both analysis of the Perth news media’s treatment of the Nyoongar Tent Embassy participants as well as insights into media representation of Indigenous issues more generally.

Thor Kerr is an Early Career Development Fellow in the School of Media, Culture & Creative Arts at Curtin University. His research focuses on media and public representation in negotiations of urban space.

Shaphan Cox is an Early Career Development Fellow in Geography in the Department of Urban and Regional Planning at Curtin University. His research explores reconceptualisations of space through representation.